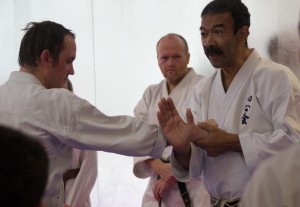 Chris Thompson started karate in 1969 with the style Wado Ryu under Tatsuo Suzuki, who brought Wado to Europe directly from Japan. He has been a national champion and represented England on many occasions.

The Washinkai Karate organisation, established in the UK in 1977 by Sensei Chris Thompson 8th Dan, has been extremely successful enabling students to learn authentic karate with its origins in Japan.

The Washinkai group in Spain was established over 10 years’ ago in Javea and is headed by Geovanny Salazar Sanchez and Sarah Lakin. The group has become the largest in the Valencia region.

You can view a detailed profile about Sensei Chris Thompson by visiting this page on the official UK Washinkai website.